“It’s not going to end here … because Trump has just given the jihadis a thousand reasons to stage fake flag operations.” 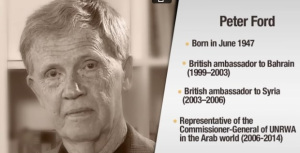 Former British Ambassador to Syria Peter Ford says those calling for intervention in Syria are likes “dogs returning to their own vomit”. Peter Ford says he believes it is “highly unlikely” that Russia or the Assad regime was behind the attack in Idlib. Follow us on Twitter: @INTEL_Today